Here's some English runners photographed in the 1890s. Aside from recalling their achievements (one of them was a three mile world record holder, another the first London to Brighton winner), I was struck by their running kits, in particular their lengthy and high-waisted shorts. All of the ones here have different coloured piping on the shorts, I wonder who made them? There was no mass manufacture of sports wear by this time, as far as I know, but there must presumably have been some specialist clothing retailers. The shoes too - which as a friend pointed out on twitter look almost like moccasins - must have been specially made.

The first photograph is entitled 'Runner James Kibble, 1891' and is from the National Archives collection. 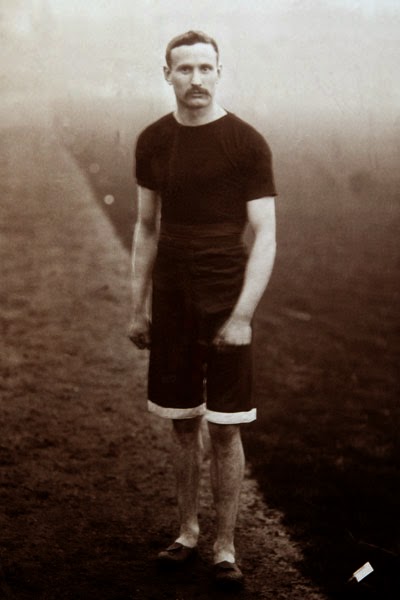 The name is an error though and it is actually James Kibblewhite, also shown in this photo from Wiltshire Historic Photographs with the caption 'James Kibblewhite, athlete, of Spartan Cottages, Purton, Wiltshire, running for Spartan Harriers in the two mile N.C.A.A. Championship, Manchester, July 1890': 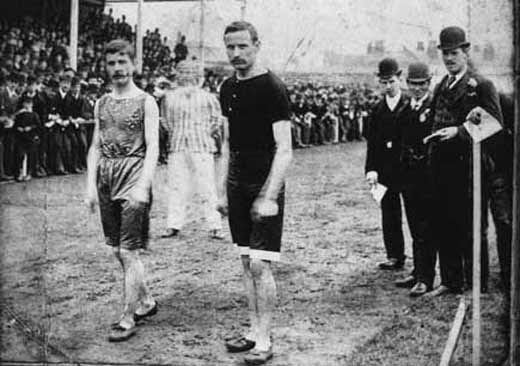 According the Newham and Essex Beagles History, Kibblewhite went on to run for Essex Beagles in 1892-3: 'The programme of races at the 1892 meeting featured a two miles match where Beagles' new recruit James Kibblewhite was forced to concede defeat to Heath of the South London Harriers. But Kibblewhite made no mistake in the AAA championship four miles race two months later, winning in a fast time of 19 minutes 50.6 seconds. While this was the first championship success for a member of the Essex club, for Kibblewhite it was a sixth (and final) AAA title, following on from his hat-trick of victories in 1890 when he lifted the one, four and ten mile prizes, and his other mile wins both in 1889 and 1891.

James Kibblewhite, Wiltshire born in 1866, started a career spanning 10 seasons in 1884 - the last year as an amateur of his fellow Wiltshire athlete, Walter George, whose feats must have attracted the young Kibblewhite's attention. Kibblewhite burst on the scene in 1889 in the black vest of Spartan Harriers and on 31 August that year, running from scratch in a three miles handicap race at Stamford Bridge, he slashed 10 seconds off George's five-year old world best, coming home in 14 mins 29.6 seconds. Swindon based - where he worked at the Great Western Railway works - Kibblewhite reached the top by "persistent practice". During his long career he won prizes valued at £1200 and probably also pocketed a tidy sum in appearance money: there were few meetings where the star names were not paid the standard £5. Kibblewhite retired three years before the AAA's crackdown on his contemporaries in 1896, so he was able to end his career untainted by the tag 'professional''.

The second athlete featured here is F.D. Randall, 'born in Enfield, on February 5th, 1864. He enjoys the reputation of being the best cross-country runner included in the ranks of the Finchley Harriers' coming second in both the Southern and National Cross Country Championships in 1892 behind H.A.Heath. We are told that the Finchley Harriers were 'the Black and Pinks' so we can easily colour his running kit in our imagination. 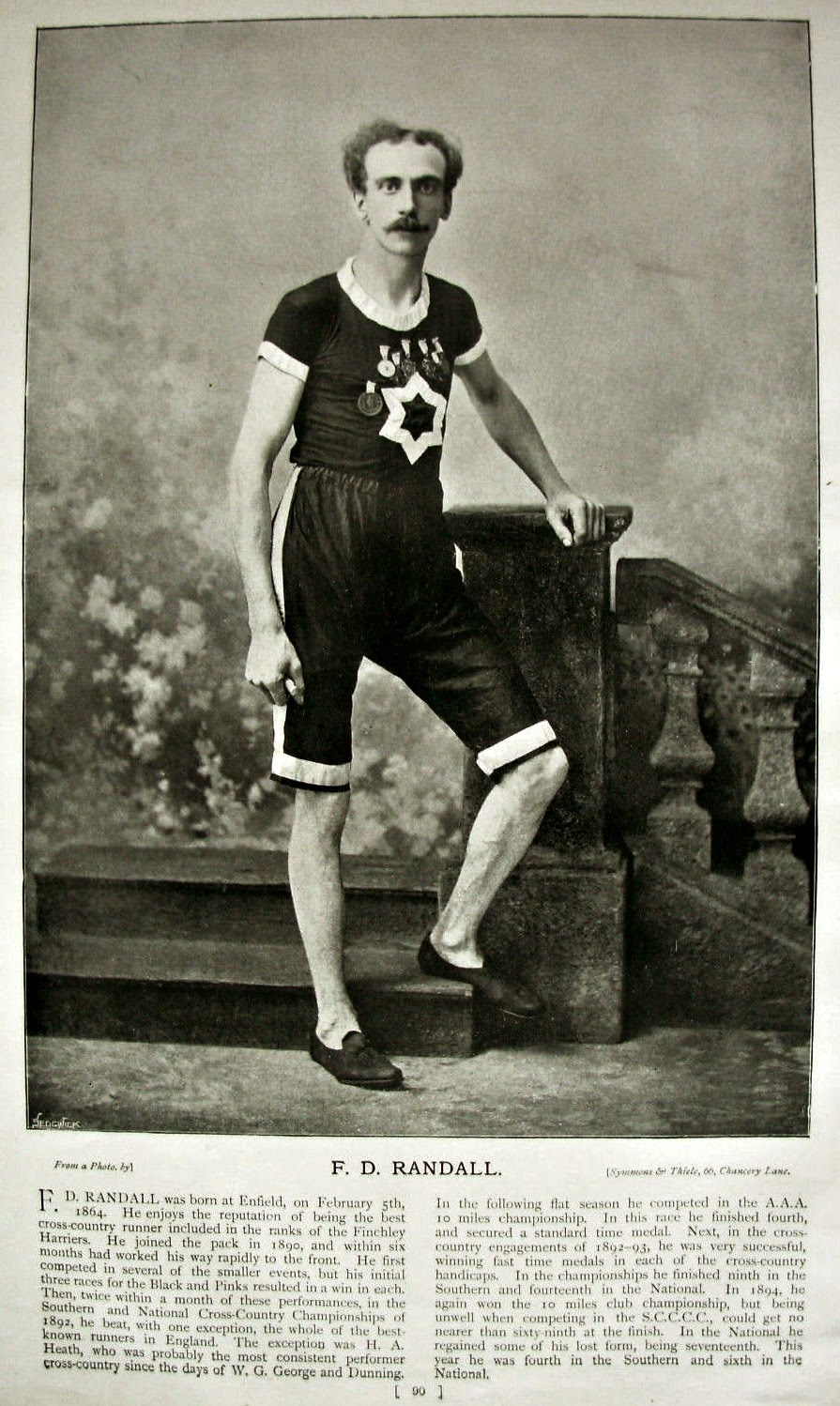 Randall went on to be the first winner of a London to Brighton race, organised by South London Harriers in 1899. He completed the fifty miles in 6 Hours 58 minutes 18 seconds. On the strength of this he was selected to run the Marathon for Great Britain in the 1900 Paris Olympics, though he was one of 6 out of 13 runners who did not finish due to the heat.

The image comes from an 1896 book entitled the 'Sportfolio: portraits and biographies of heroes and heroines of sports and pastimes' (on sale on ebay). From the same book, here's another Finchley Harrier - W.J. Fowler, one of whose claims to fame according to this book is that he once beat Kibblewhite. 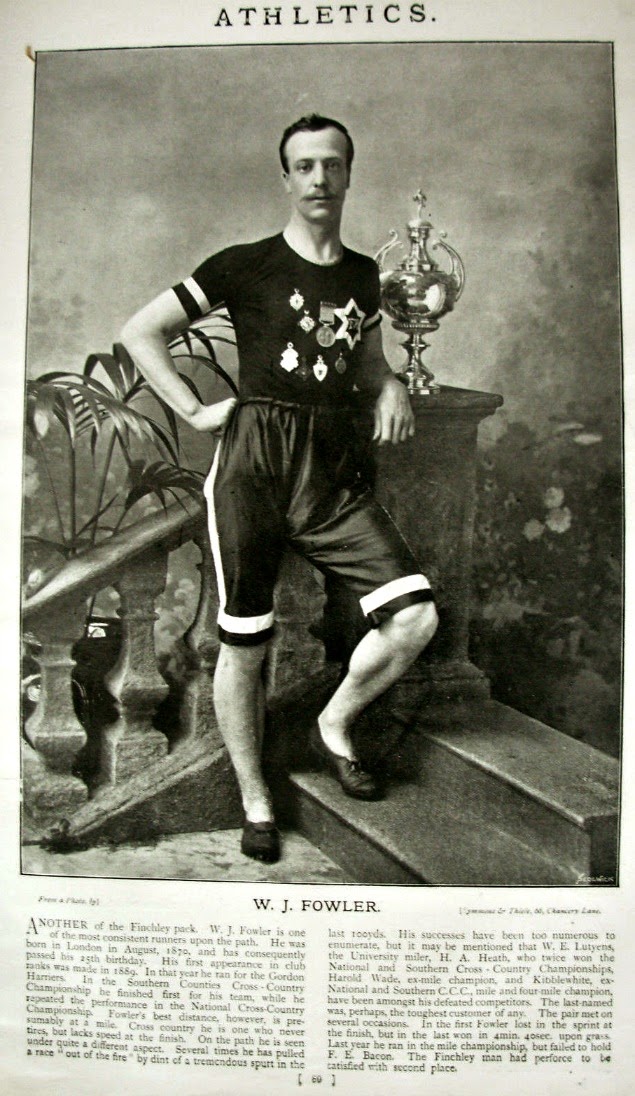