As part of the continuing research into the history of Kent Athletic Club (my club) and running in the Lewisham area of South London - building on research of club historian Len Reilly - here's some notes on A.J. Lock, one of the club's top runners in the 1920s.

I first came across mention of A.J. Lock in a report of the August 1921 Kent County Championships, which were held on the grass track at the RAF Kidbrooke Sports Ground - located where the Ferrier Estate was later built, as noted by Running Past. The competing teams included clubs such as Herne Hill Harriers, City of Rochester AC and South London Harriers, as well as mlitary athletes from the Royal Marines and other regiments. I was most interested to see mention of Kent Athletic Club runners - G.P. Sweet  from  Lee, who came 2nd in 440 Yards, and  A.J. Lock (from Forest Hill) who came 1st in the 880 yards race.  Kent AC also one the One-Mile Relay and Lock no doubt took part in that, as this seems to have been a speciality of his. 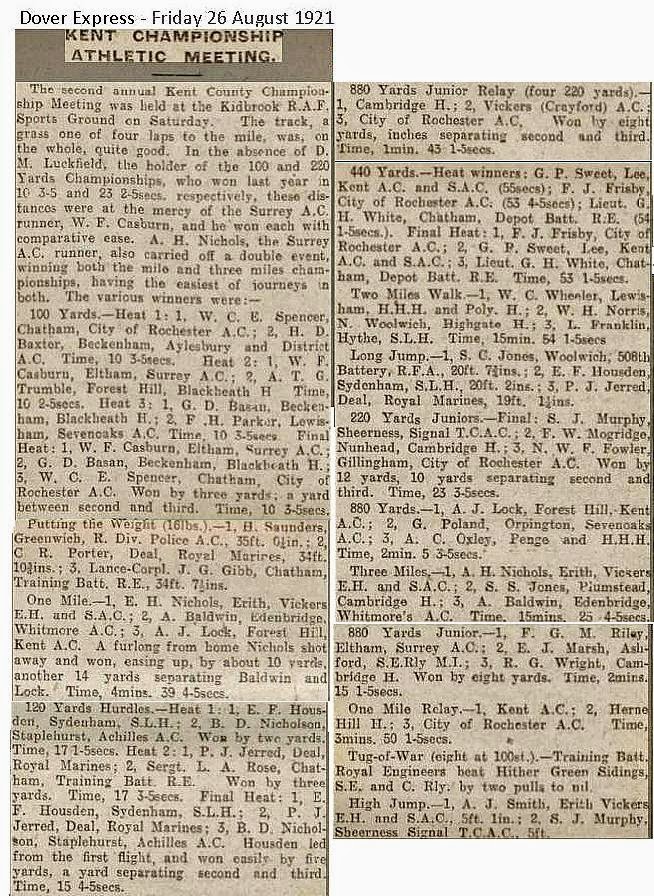 The year before, in September 1920, A.J. Lock took part in what the Times called  'the greatest International Athletic Meeting which has ever been held in this country', at Queens Club, West Kensington, between athletic teams representing the United States and the British Empire. Queens Club, now best known for tennis, was up until 1922 the main football ground for Corinthians FC. It was too small a venue to accommodate everybody who wanted to come: 'People climbed on to the roofs of the club buildings, sat on walls [and] overflowed from the stands on the grass edges of the track'

The meeting was also reported in the American Spalding's Official Athletics Almanac 1921, which reported that 'the programme was made up largely of relay events, this latter form of racing not being as well known in England as in the United States'. A.J. Lock, England, is listed as taking part in the 4-Mile Relay (i.e. 4 x one mile), which was won by the USA: 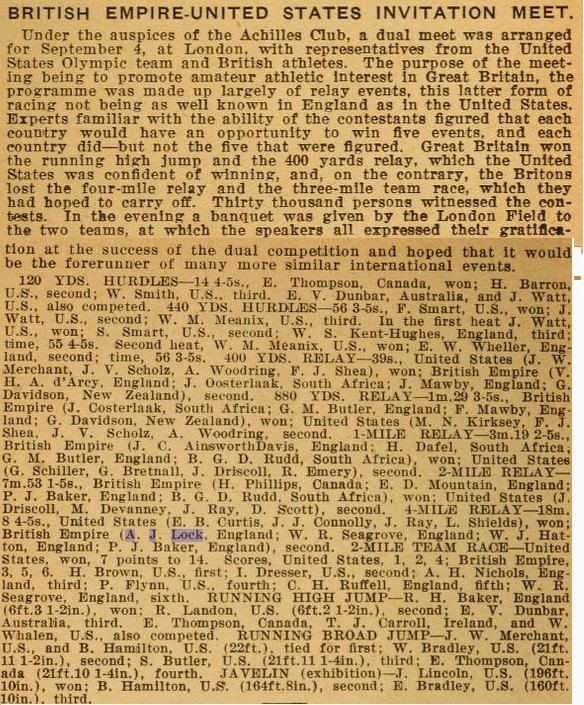 In 1923 (September 15th), Lock was one of 'the cream of the southern clubs' milers selected to take part in a Ten Miles Relay Match between Birchfied Harriers and the South. The race was held as part of an end of season London Athletic Club meeting at Stamford Bridge watched by 'about 7,000 spectators' and won by the South:

I have found several other mentions of Lock from the 1920s. In March 1926 he came second in the Royal Ordnance Factories Championship five mile race in Eltham:

In December 1927, he won Kent AC's own Transvaal Cup in a five mile cross country race at Bromley, six seconds ahead of R.G. Goddard:


It was the same result in the same race a year later in 1929, though presumably conditions must have been better as the winning time was more than 8 minutes faster:

R.G. Goddard seems to have been Kent AC's top cross country runner in this period - in 1927 he was the club's first finisher, in 19th place, in the South of the Thames Cross Country race held at Reading (Times, 14 Feb 1927). Goddard was still coming in top five in Kent AC cross country in 1930, with no sign of Lock by this point in the leading positions:

(If you have any more information about A.J. Lock, R.G. Goddard or any other historic Kent AC runners, please get in touch)