Before the rise of athletics clubs in the second half of the nineteenth century, the main focus for organised running in England was on races between individual  runners. In a format not unlike boxing, runners with outlandish nicknames challenged each other through newspaper columns and large crowds turned up to watch and bet on the outcome. Newspapers including Bell's Life in London and The Sporting Life promoted the sport, making national celebrities of some runners, and many local pubs were also involved both in hosting events in their grounds (crowds meant drinkers) and as places where the competitors would lay down their respective stakes for prize money. Runners sometimes had backers who put up the stake money for them, in return taking their share of the winnings. The whole sport was known as 'pedestrianism', a term that covered all kinds of foot-races, including walking races, sprints and longer distance runs.

Two prominent pedestrians in the mid-19th century were brothers from Lewisham: John Perch (alias Railway Jack) and Thomas Perch (sometimes known as the Lewisham Pet).  This is where my club, Kent AC, is based - so as part of exploring its history I have been looking into the earlier world of pedestrianism in this part of South London.

The 1841 census shows the Perch  family living at No. 1, Gothic Cottages, Rushey Green – at the time John was 15 with another brother Richard of the same age (twins?), along with siblings including Thomas (13 - he was baptised in May 1829 at St Mary's Church, Lewisham) and Joseph (7). The Gothic Cottages seem to have been at 110 Rushey Green - an

The father’s occupation is given as castrator. Both Thomas and John were subsequently listed as having the same occupation in the 1851 and 1861 census respectively - in the latter John was living with his parents at 7 James Place, Lewisham with father and son both giving occupation as ‘castrator of stock’.  This is a reminder that at this point Lewisham in Kent had not yet been completely swallowed up by the expanding metropolis - there were still farms in the area.

Not along after this, John Perch began to make a name for himself as a sprinter and hurdler. In January 1844 'Two very excellently contested foot-races took place... near the eighth mile-stone at Lewisham' with 'a very numerous assemblage of the patrons and admirers of pedestrian performances'. Goldsmiths of Greenwich beat Banks of the West-end over 250 yards and in the second match Perch beat Par over 150 yards (West Kent Guardian, 20 January 1844).

Although this Perch is not specifically named, it seems most likely that it was John, as there are other reports from the same year that identify John Perch - or Railway Jack - as a runner, and none I have found at this stage that mention Thomas. We know of some of John Perch's races through contemporary reports, and others from newspaper listings of forthcoming events:

- in August 1844, he won a hurdle race over 350 yards at the Tiger's Head in Lee Green, Lewisham (see post on this race at Running Past);
- 'Perch of Lewisham (alias Railway Jack), and Naylor' were scheduled to 'run a match on Wednesday September 18 [1844] at the Beehive Cricket Ground, Walworth, distance 200 yards, and to leap 10 hurdles, 20 years apart, each hurdle to be 3 feet 4 inches high' (The Era, 8 September 1844);
-  In January 1845 'Railway Jack' - this time described as 'of Greenwich' beat George Parry ('alias Jim Crow') over 150 years at Southend, Lewisham (8 February 1845);
- Later that year he 'ran a quarter of mile race for £5 a side' against W. Berry of Lambeth, with Perch having a head start of ten yards in the race at South End, Lewisham: 'The start was a good one, both going away at a rattling pace. Perch however kept ahead throughout the distance, and went in an easy winner, Berry having given up some distance from the finish' (Bell's 14 Sept 1845)
- In November 1845 he was scheduled to run against Pearce Naylor, over 150 yards at the Tigers Head in Lee Green, Lewisham (The Era, 23 November 1845).

There are reports of challenges too: 'Edward Smith will accommodate Perch, alias Railway Jack, of Greenwich, with a match, and will give him two yards start in 150 for £5 or £10 a side, or he will run him  a quarter of a mile and leap 15 hurdles for £10 a side. The money will be ready at Mr Parr's, Green-street, Grosvenor Square, to-morrow' (Bell's, 4 Feb 1844).

John Perch '(alias Railway Jack) of Lewisham' won 'a silver stop watch' in a 150 yards race beating five others, at the Kings Head in Bexley Heath in November 1847. There was a dispute about whether he should have been allowed to receive the prize as the race was for runners 'who had never won more than £5 in any race', and Perch had  previously won a race against Berry of Lambeth advertised as being for a £10 prize. However the landlord of the Fisherman's Arms in Greenwich confirmed it was in fact only for £5. The landlord is described as the 'stakeholder for that race'- the origin of this term is the person who holds the stake put down for a wager (Bell's, 7 November 1847).

Intriguingly in 1844, it was reported that 'Railway Jack's youth and S.Penny of Greenwich' will 'run tomorrow... at the Green Man, Southend, Lewisham' (Bell's 10 March 1844). Could this have been his younger brother? Certainly in the following year, both Perch brothers took part in a 350 yard hurdle race in a field by the Tigers Head, Lee along with James Kitchener (the Hampstead Stag) and Ned  Wild (Merrylegs) (Bell's 7 September 1845).

If Thomas Perch started off as John's lesser-known sibling with reports referring to him as 'brother to Railway Jack' (Bells, 28 January 1849) he soon seems to have established a reputation as a runner in his own right.

In January 1849 'nearly two thousand persons assembled' to watch him beat Joseph Judd of Westminster in a 120 yards race at Beddington Corner, Surrey for which 'both men had been in active training'. He was described on this occasion as 'about 5 feet 5 inches in height, and weighs about 8 stone; when stripped, his skin looks a nut brown, is well knit together, and all runners of his size will find him a troublesome character. He first showed in public a short time ago by beating Price of Mile End rather easy in a six score yard race' (Bell's, 28 January 1849).The latter race with William Price was over 130 yards in December 1848 (Bell's, 3 September 1848)

In the following year he raced James Mayne of Mile End, for £25 a side, at the Flora Ground in Bayswater (Bell's Life in London, 29 September 1850). Once again the report emphasises the runners' preparation - this was a serious sport, not a casual contest between talented but unprepared athletes: 'Both had been actively trained for the event, Mayne under the charge of John Smith of Turnham Green, and Perch had the advice of his brother John at Charlton'. The result 'in one of the best contested races ever witnessed' was declared a dead heat.

The rematch the following week saw Perch win 'after seven false starts', proving himself 'a very smart runner... a good starter, very quick in getting into full speed' against his 'remarkably game' competitor (Bells 6 October 1850).

Other Thomas Perch races reported as having taken place or being scheduled included the following:

Perch both issued to challenges to other runners, and was in turn the subject of challenges to him. An example of the former from 1850 reads: 'Thomas Perch will run Jesse Smith, Dawkins, Connor, or Sillitoe a quarter of a mile, or Washington of Crayford three yards  start in 200 for £25 a side. A match can be made at Mr Clarke's, Yorkshire Grey, Blackheath-hill' (Bell's 8 Dec 1850).

Conversely, in April 1853, R.Elliot of Kings Cross challenged 'Perch of Lewisham, Stevens of Eltham' and a couple of other runners to race for '100 or 120 yards a side' (Bell's 17 April 1853). Acceptances of challenges were also published in the press. For instance, it was reported in 1850 that  'Perch of Lewisham will accept Newman's challenge to run 140 yards for £25 a side, and will meet him a the Yorkshire Grey, Blackheath Hill, tomorrow (Monday) night; to run in three weeks from the first deposit. The Editor of Bell's Life to be a stakeholder' (Bells Life, 17 February 1850).

In 1859 Thomas Perch repleid to a challenge from W. Price offering for a match to be made at the Duke of York in Greenwich (Bell's 27 Feb 1859). A race between the two did go ahead at the White Lion, Hackney Wick: Price 'won as he liked by a long distance; Perch being, apparently, anything but fit for a running match' (Sporting Life, 24 March 1859). Perch wasn't finished yet however.  He was nominated to take part in a 100 yards race at the same venue soon afterwards - 'the rendezous of all the Victoria Park pleasure seekers' - in the following month for a silver tankard prize (Sporting Life, 13 April 1859). And in 1860 he was still receiving public challenges: 'T. Schofield of Woolwich will run T.Perch of Lewisham, or Steven of Eltham... An answer to the Sporting Life will be attended to' (Sporting Life, 21 November 1860).

I have also found reference to a couple of cricket matches featuring the Perch brothers. A match between  Lewisham St Germans Club  and Bexley Heath in July 1853 featured an R. Perch, J.Perch and a T. Perch (The Era, 17 July 1853). Another match,  between Lewisham St German's and the City Club at the Roebuck Ground in Lewisham featured a John Perch (who hit 'an immense score on such a ground') and and a R. Perch (The Era, 1 August 1852). In my family history search at ancestry I didn't find another Perch family in Lewisham with individuals with the right name and right age, so it seems almost certain that these were the same Perch brothers. 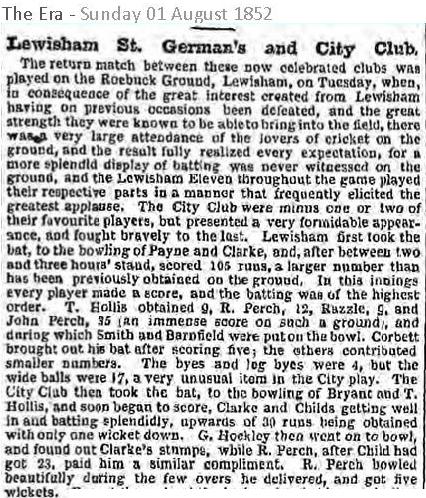 At some point the Perch brothers must have hung up their running and cricket shoes. In the 1871 census, Thomas was living with his wife at 8 Mercy Terrace, Lewisham – his job given as a labourer. Interestingly at that same address in 1881 were to be found the Brewers - one of several Lewisham families who went on to become important figures in the history of Essex County Cricket Club as groundsmen and players.

Aside from some local colour - nice to know that the Perch brothers both lived within a few minutes run of the Kent AC's current Ladywell track - what does all this tell us? Well in my reading about this period 'pedestrianism' is sometimes looked down upon as some kind of circus sideshow prior to the emergence of 'proper' running under the aegis of running clubs and the Amateur Athletics Association. From my research into the Perch brothers it is clear that they were dedicated runners - training hard and sustaining careers over a number of years as part of a national circuit of like-minded athletes. And judging by their involvement in cricket, they were not separate from the emerging world of organised sports clubs, but at its heart.
Posted by Neil Gordon-Orr at 22:53