Save Athletics at Crystal Palace

The athletics stadium at the National Sports Centre in Crystal Palace park was until recently the Wembley of British track and field, where large crowds gathered to watch big international events. Many of the greatest athletes in the world ran in the London Grand Prix events held there between 1953 to 2012 (though the park's association with athletics goes back much further - see this race report from 1873).


Now the fight is on to save any athletics provision in the park as a result of changes proposed by the Greater London Authority, which is currently responsible for the National Sports Centre site.

Under proposals being consulted on by the Mayor London, the 17,000 capacity stadium would be demolished entirely. While a swimming pool would be retained, barely any consideration has been given to the future of athletics. The indoor track would be 'permanently removed', while the possibility of retaining an outdoor 'community athletics track' is unpromisingly described merely as 'currently under review'. 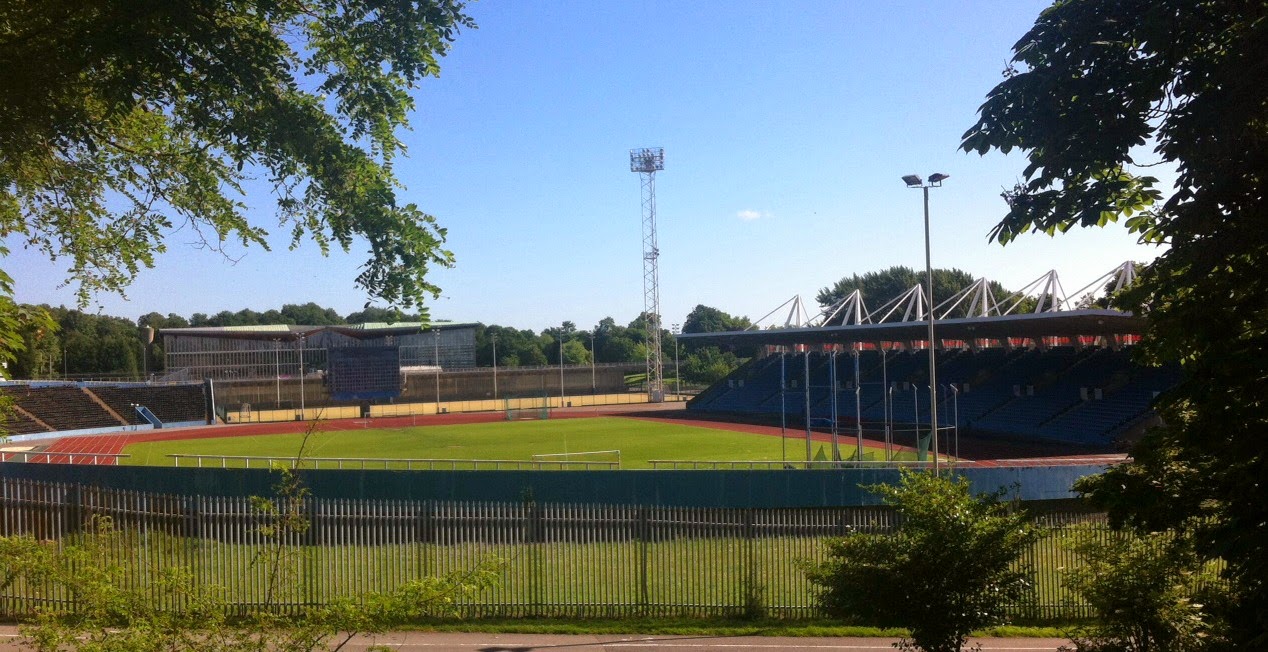 The stadium itself is arguably surplus to requirements since the opening of the Olympic Stadium in Stratford. There is a broader issue of how poorly sporting authorities promote athletics as a spectator sport, and I am sure there is sufficient interest in London to get good crowds for more than one event every year or two (the frequency of Diamond League events at Stratford). But it is undeniable that at present Crystal Palace is under-used as a stadium - although a smaller pavillion/stand would be quite feasible as long as a track continues.

The loss of track(s) would be much more catastrophic, effectively ending any use of the park for serious athletics. A community track would be a great asset to the new school(s) planned to replace the stadium, as well as to the local clubs and others who use the current facilities, including South London Harriers and Crystal Palace Triathletes.

If athletics is going to flourish in this country we need mass participation and a network of good, accessible clubs and tracks across the country that can sustain a vibrant running culture at all levels - as well as enabling the next generation of potential elite athletes to be engaged, identified and supported. The mass participation side has really taken off through parkrun, and an increasing number are taking the next step on to the track to train with their local running club. The so-called Olympic legacy is looking very fragile if this progress  is going to be undermined by losing facilities in places like Crystal Palace and elsewhere (this year we have already lost the Don Valley Stadium in Sheffiled despite a campaign to save it)

A campaign to save athletics in the park has been launched, spearheaded by well-known coach John Powell. Please do go and sign the petition as well as responding to the consultation (which runs until 16 November). The petition states:

'Save Athletics - and sport - at Crystal Palace. Current plans threaten to bulldoze the iconic athletics stadium and indoor training track, and rebuild sporting facilities in the glass recreation centre building. The impact of this on track and field in London, let alone other sports could be disastrous. What IS the Olympic Legacy for South London?! The Crystal Palace Sports Partnership (CPSP) is a group of stakeholders who are combining to form one unified voice representing all interests in the future of this historic site. Our mission is simple:

......We support a mixed-use sports and leisure centre at Crystal Palace - a sustainable facility that is shared by the local community, schools, clubs and aspiring athletes at all levels.  It should be a resource that caters for the needs of recreational users as much as it provides for and supports the development of the next generation of Olympic athletes. We are concerned that the consultation by the GLA for repurposing the current National Sports Centre is way too short and has failed to identify and consider the needs and views of existing users.  We request that user groups and local stakeholders are more thoroughly engaged in shaping the outcome of this process.

In their response, the South of England Athletic Association (SEAA)  says:

'The South of England Athletic Association (SEAA) represents and provides competition for all the athletes and athletic clubs within the whole of the area.  We have considered the outline proposals and condemn any plan that removes the athletic facilities.  We accept that the Olympic Stadium provides a fitting setting for televised major meetings but it is inappropriate for the many lower level meetings and is certainly not available as a training venue.  Track and field athletics is a summer sport with all year round training needs so an indoor track is essential in winter.  Crystal Palace fulfils the requirements for track and field athletes from both clubs and schools.  As a facility that has been regularly used for training, local club and school meetings and SEAA Championships over many years any redevelopment should take account of these needs.  As a major competition provider we believe that complete removal of this facility would be severely detrimental to athletes and athletics in London and the surrounding areas.

We propose that the following would ensure the centre meets those needs:

- A full 8 lane track is maintained together with all field event facilities such as long jump pits and pole vault bed.
- A new up to 1000 seat stand is built incorporating changing rooms, equipment stores and administration areas.
- A photofinish “tower” is appended to the stand to allow meetings up to national level to be accommodated.
- At least a 100m indoor straight and field event facilities should be incorporated in the design of one of the new buildings.  This may be an opportunity to build a full 200m indoor track for the whole of London south of the river' (3 November 2014).

One of the ironies of the Crystal Palace proposals is the role of one time runner at the track, Sebastian Coe - he ran his final UK competitive 800m there in 1989. Coe is now Executive Chairman of sports management consultants CSM Strategic, and they have been paid to conduct the consultation on the future of the site. Coe was a great runner, and a competent sports administrator, but lets not forget he is also a Conservative politician (as MP and now Lord) and businessman...

...And there are some very big business interests involved in the future of Crystal Palace. As Inside Croydon has documented, the plans for the sports stadium are strongly influenced by plans by billionaire developer Zhong Rong to build a replica of the original Palace on the terraces at the top of the park, complete with hotel, shops and conference centre. A GLA document  on the sports centre states that “The success of the proposed new Palace is inextricably linked to its wider landscape" and demolition of the stadium would open up the sightline from the planned development.

For many of us the melancholic terraces with their lonely statues looking out across the park are one of the best parts of Crystal Palace, and keeping them as they are is certainly preferable to the kitsch monstrosity proposed by the developers and championed by Johnson. If the 'new Palace' goes ahead it will not only grab public land for private profit but also damage sports and other provision in the wider park. It is not just the running tracks that are under threat in the long term - the Crystal Palace parkrun route, and the perimeter road used for triathlon and cycling events, both enter into the part of the park most affected by the planned development, and new access roads could also disrupt these routes. The park itself risks becoming reshaped as a back garden for a commercial enterprise rather than continuing as a multi-use space at the heart of South London sports and athletics.
Posted by Unknown at 23:39