I am currently a part time student at Goldsmiths College (University of London) in New Cross. Goldsmiths doesn't have an active athletics club at the moment - keen runners there tend to gravitate instead to the local Kent Athletic Club- but it does have a long history of athletics involvement.

What was originally Goldsmiths' Technical and Recreative Institute was founded by the Worshipful Company of Goldsmiths (one of the City of London's livery companies) in 1896 for 'the promotion of technical skill, knowledge, health and general well-being among men and women of the industrial, working and artisan classes'. In 1903 it was transferred to the management of the University of London.

There seems to have been an athletics club from early on, and one of its first prominent runners was Alec Nelson (1871-1944). A report of an 1897 1,000 yards race, organised by Finchley Harriers, records that 'A. Nelson, of the Goldsmiths Institute Athletic Club, rushed to the front. Travelling at a great rate he gained a lead of eight yards in the first furlong' but having 'misjudged the pace... was done with a hundred and fifty yards from home' (1).

The following year 'The South London Harriers held their Autumn meeting at the Oval on September 17th, when there was an attendance of about 3000. The 1000 yards Invitation Scratch Race brought out a field of thirteen, and A. Nelson, Goldsmiths' Institute, won easily from J. Binks of Wandle, C. Pearce of Northampton, being third. Time, 2 min 15 sec, which is claimed to be a grass record for the distance' (2).

Nelson went on to become a professional runner from, winning a professional half-mile championship in 1905 (3). An article from this period bemoaning the dearth of professional athletes in England, mentions  'Another candidate is Alec Nelson, the old Goldsmiths' Institute runner, but he has no pretensions to be regarded as a distance champion, a mile being almost his limit as a class man' (4).

When his own running career came to an end, Nelson took up coaching. He was a professional coach at Cambridge University 1908-1913, and also coached British athletes for the 1912 Olympics in Stockholm (5).

In the First World War he served in the Friends Ambulance Unit in Italy and France - this was a voluntary service founded by Quakers and mostly staffed by conscientious objectors. Nelson worked alongside FAU founder Philip Noel-Baker (6), later Labour MP and disarmament campaigner. Baker had been President of the Cambridge University Athletic Club from 1910 to 1912 (7), which is presumably how the two first met. As Ian Stone (8) has demonstrated, the long term friendship with Baker was an important factor in Nelson’s career. After the war both became involved again in athletics. Baker was captain of the British track team for the 1920 Summer Olympics in Antwerp and won silver medal in the 1500m (9), while Nelson returned to coaching at Cambridge. .

Nelson was well known enough by 1919 to be mentioned in an article in the Times arguing for more 'Money and Trainers' to improve Britain's prospects at the following year's Olympics. 'The Olympic Games: British Need of Organization' by Lieut. Col. A.N.S. Strode-Jackson (winner of the 1500m at Stockholm Olympics) 'We want immediately a fund of £100,000... With this money we could engage a supervising trainer of the stamp of Alfred Shrub and Alec Nelson for athletics' (10).

As well as coaching Cambridge University Athletics Club athletics coach from 1920 to 1939, Nelson coached the Achilles Club (11), founded for ex-Cambridge and Oxford athletes. Another engagement, in 1928, was in the capital: 'Alec Nelson the well known trainer for the Cambridge University A.C. has been appointed by the University of London Athletic Union as coach of the athletic team' (12) .

As well as Philip Noel-Baker, Nelson is known (13) to have coached athletes including Harold Abrahams of Chariots of Fire fame (winner of the 100m at 1924 Paris Olympics), Douglas Lowe (winner of 800m at Paris and in 1928 in Amsterdam), Henry Stallard, Lord Burghley, and G.M. Butler. He also coached Irish athletes Patrick O'Callaghan, Bob Tisdall and Eamon Fitzgerald to prepare for the 1932 Olympics in Los Angeles (14) – O’Callaghan went on to win gold in the hammer throw (15), Tisdall gold the 400m hurdles (16) while the injured Fitzgerald narrowly missed out on a medal in the triple jump (17).

Nelson was the author of an influential textbook, Practical Athletics, first published in 1924 with a  2nd edition in 1930. Copies of these appear on ebay from time to time. 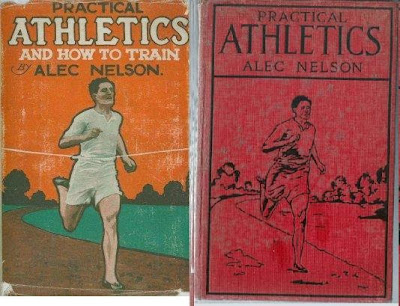 Nelson's death in 1944 was marked by a short obituary in The Times:

Ian Stone of Durham University is researching Stone's career. His powerpoint presentation (see ref. 6 above) is available online and includes photographs of Nelson.  I believe that there is also an article based on this but I have not yet seen it: Stone, I. (2012). Alec Nelson: Professional Runner, Athletics Coach and Entrepreneur-Client. In Sporting Lives, special issue of ‘Sport in History'. Day, D. Routledge. 103-133).
Posted by Unknown at 23:59