A round up of running things going on round my way:

Your Pace no Race in Burgess Park

I took part in the 5k parkrun in Burgess Park (Camberwell/Walworth) last week, which like all UK parkruns takes place every Saturday at 9 am. Something slightly different coming up in the park next month though:

'Fancy a running event where no one comes last? Are you new to running and want an achievable goal? Not ready for a 5k or 10k race yet? "Your pace no race" is a running event were no one comes last. You can choose from two, three or four kilometre runs, with no timer, no top three prizes and no race numbers. Just you, your challenge distance and a fun, friendly, no pressure event.

Sunday 22 September 2013, 11am to 1pm. £5 entry for all distances Register on the day and arrive by 10.15am to pay and sign in. Free tshirt for all participant All events are wheelchair and pram friendly. 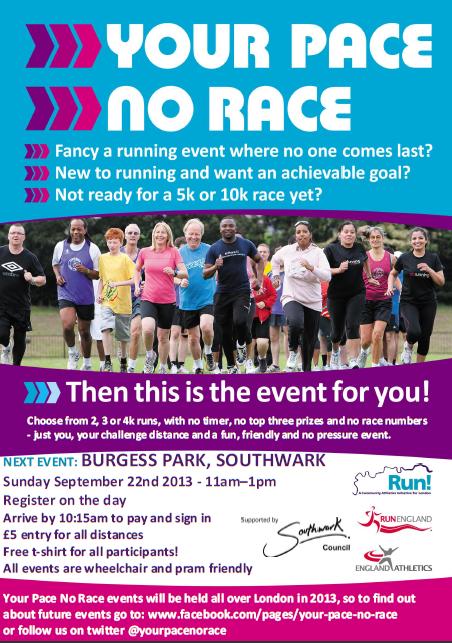 Meanwhile elsewhere in Southwark, Rotherhithe's Southwark Park is re-emerging as a running venue with a new parkrun starting there on Saturday September 7th. I went for a run there today, nice flat course with tarmac path so should be good for those chasing a 5k PB.

This month London City Runners have started a weekly Thursday training night in the park (7 pm start) , using the nearby Seven Islands Leisure Centre to leave belongings. London City Runners was established in 2010 and has quickly grown to over 2000 members. The club currently train twice a week from Bermondsey Square, but due to restrictive space have been looking to expand the number of sessions they offer each week.

Bromley Parkrun are celebrating their 4th birthday on 31st August 2013, and will be running their usual course backwards - that is running in the opposite direction to normal, not actually running backwards!

My home Hillyfields Parkrun in Lewisham will be having its first birthday on 14th September with cake and prizes. They will also be reversing their normal direction so those dreaded uphill stretches will now be a doddle, and those downward slopes... well you do the math. Check their facebook page for updates on what's planned..

There's lots of running clubs locally, most of which cater for all levels from beginners to elite runners (including in some cases international athletes). South London Clubs include: